Get Happy About Oral Hygiene

When I graduated from the University of Iowa's dental hygiene program in 1982, I never dreamed that I would one day be telling people I no longer use string floss. After joining Water Pik, Inc. in 1996, I counseled dental professionals to consider water flossing as an adjunct to traditional brushing and flossing. Like most industry practitioners, I believed a mechanical action was necessary to remove plaque; thus, adding water flossing to string flossing would garner the best results. Well, maybe.

In reality, having patients do three things is a lot to ask. Even as a dental professional, I sometimes found myself skipping one, especially if I was short on time or tired and wanted to go to bed.

My behavior was apparently quite common. As a frequent international lecturer, dental professionals often asked me whether patients really needed to string floss if they were water flossing. The first few times I'm certain I looked at them as if they had just committed heresy. It wasn't until I stopped judging and began listening that I started to learn something important. Routinely, we heard that the dentitions of patients who used a water flosser looked great, and more often than not they weren't using string floss.

Today, it is common for people to talk about the water flosser as a "game changer." I wholeheartedly agree. But I would add that the real "game changers" were the dental professionals, especially dental hygienists, who had the courage to ask questions and speak up when string flossing was clearly still considered the first, best, and only option for interdental cleaning.

Back then, those plucky practitioners who questioned string flossing and embraced water flossing were in the minority. Now, I believe the reverse to be true. Occasionally, during my CE presentations I encounter someone who still believes floss is king and/or that water flossing doesn't work, and usually I don't need to respond. Generally, it's their colleague who looks at them as if they are crazy and tells them it's time to get up to date.

A couple of years ago, I attended a course on dental implants. The speaker was on the topic of self-care, and she asked the 100-plus attendees what they felt the best tool was to clean around implants. When I heard a collective "Waterpik" response from the audience, I could not stop smiling. It was confirmation the Waterpik® Water Flosser had achieved critical mass for dental professional recommendations.

Today, when I'm asked if the Waterpik Water Flosser removes plaque, the answer is a resounding "yes." If you think this can't be true and that mechanical action is essential, I will point you to the study conducted at the University of Southern California Center for Biofilms where researchers used scanning electron microscopy and observed that the shear hydraulic forces created by the combination of pulsation and pressure removed up to 99.9% of plaque biofilm.1 It's not that floss doesn't work; if patients are using it and have good oral hygiene, there may be no need to change anything. However, it is likely that both dental professionals and patients are looking for something else, because patients either don't like to floss, can't floss, or simply don't want to put their fingers in their mouths. A Waterpik Water Flosser is usually the answer.

Here is something else I know: easy wins. When you are doing something that is hard or unpleasant, it can feel like the task takes a long time. This is true of string flossing. How many times have patients used the "don't have time" excuse? This is why I am so excited about the new Waterpik® Sonic-Fusion. It has the potential to help so many nonflossers improve their oral health.

If you haven't boarded the water flossing train, it's not too late. If you are hesitant, I understand. I was uncomfortable with the notion of giving up string floss. The science convinced me. But actually using water flossing is what made me lose my loyalty to string floss.

Whether I'm giving a CE course or at a tradeshow, dental professionals approach me and gush, yes gush, over the results they are getting with the Waterpik Water Flosser. The happy looks on their faces give me great satisfaction. I believe it's making patients happy, too.

I'll leave you with a final thought. A couple of years ago, I was going through airport security. As I went to pick up my laptop, the screener stopped the belt. I thought he was going to take my computer for additional security. Instead, he pointed at my business card, which was taped to the laptop, and asked me if I worked for Water Pik, Inc. I told him I did, and he started doing a happy dance shouting, "I love it, I love it, I love it. I love it so much I bought one for my son, and he loves it." I told him he made my day, and as I walked away it occurred to me that during my clinical career no one had ever gotten that excited over string floss. 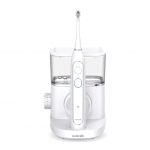