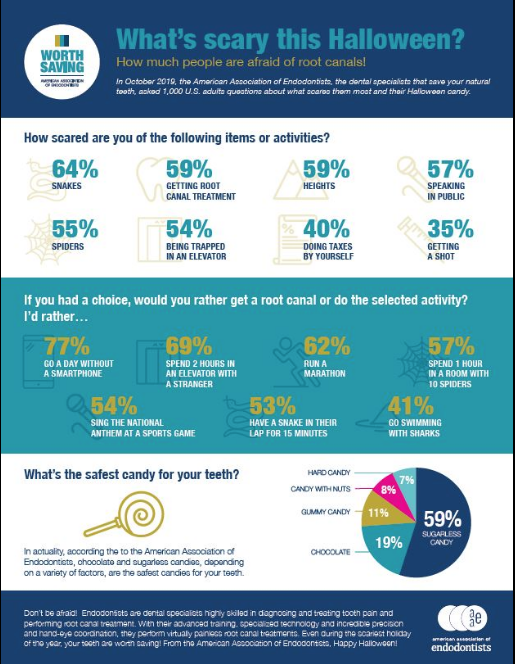 Part of the fun of Halloween is being afraid – very afraid – but, it turns out at least one of our top fears is unfounded. A recent study by the American Association of Endodontists (AAE), the dental specialists who save your natural teeth, showed more people (59%) are afraid of getting a root canal than speaking in public (57%), spiders (55%) or being trapped in an elevator (54%).

The October 2019 survey of 1,000 U.S. adults also found that when given the option of a root canal or another activity:

54% would rather sing the national anthem at a sport game.

53% would rather have a snake in their lap for 15 minutes.

41% would rather go swimming with sharks.

“The reality is there’s nothing to be afraid of when it comes to root canals,” said Keith V. Krell, D.D.S., M.S., M.A., president of the AAE.  “As pain management experts skilled in advanced dental technology and anesthetics, endodontists can deliver a virtually painless procedure.”

As trick or treaters get ready to indulge in large amounts of Halloween candy, the study also asked: What’s the safest candy for your teeth?  Out of a list of traditional Halloween-style candies, only 19% of people were able to identify chocolate as one of the safest candies for your teeth and just over 1 in 5 (22.5%) of 18- to 24-year-old’s were able to identify “gummy candy” as being the worst for your teeth. Meanwhile 68.1% of those 65 and older successfully ranked sugarless candy as one of the safest options compared to only 39.5% of those who are 25-34 years old.

“While wearing fake teeth can be fun at Halloween, there’s nothing like your natural teeth year-round for how they look and how they perform,” said Krell.  “If you’re experiencing tooth pain or need a root canal treatment, the best way to ensure you save your natural teeth is to see an endodontist right away.”

Other interesting findings from the Halloween study include:

About the American Association of Endodontists: The American Association of Endodontists (AAE). The AAE is headquartered in Chicago and represents more than 8,000 members worldwide. Endodontics is one of nine dental specialties formally recognized by the American Dental Association. The AAE, founded in 1943, is dedicated to excellence in the art and science of endodontics and to the highest standard of patient care. The Association inspires its members to pursue professional advancement and personal fulfillment through education, research, advocacy, leadership, communication and service. For more information about the AAE, visit the Association’s website at aae.org. For more patient focused information, visit aae.org/patients.