For Gary Alex, DMD, dentistry is a family trade. His father, a World War II veteran, went to college on the GI bill, and later opened a "home office" private practice in Huntington, New York. As a result, Alex was exposed to dentistry at an early age. "My father would let me ‘practice' cutting and filling cavity preparations on the teeth of a skull he had in the office," he reminisces. Eventually, the younger Alex would study dentistry at Tufts Dental School, his father's alma mater, before having "the privilege of working with my father for almost 20 years before his retirement."

Following in his father's footsteps, Alex now owns a successful restorative dental practice in Huntington. Adhesive dentistry, which allows for greater preservation of tooth structure, is important to Alex, and for him a reliable "universal" adhesive is indispensible. "Universal adhesives offer versatility, ease of use, and effectiveness when used properly," he submits. "Theoretically, because they reduce the number of steps required, the chances for clinical error are less."

Alex, who has been a long-time user of BISCO adhesive products, has made the company's All-Bond Universal® his universal adhesive of choice. "The product has worked extremely well for me right from the get-go," he attests, noting that he believes the material's chemistry, which incorporates the use of the 10-MPD monomer, is exceptional for adhesive dentistry.

"One of the biggest challenges in developing a universal adhesive is striking a balance between hydrophilic and hydrophobic characteristics," says Alex, who studied both chemistry and biology at Penn State University. "BISCO conducted significant research to optimize certain components, such as water and hydroxyethylmethacrylate (HEMA) concentration, to maximize their positive attributes while minimizing undesirable properties, such as water sorption and hydrolysis," he explains.

Alex generally prefers to use All-Bond Universal in only a total- or selective-etch ca-pacity. "This way I can ensure I am getting a good long-term bond to any enamel that is present."

"BISCO is a reputable manufacturer known especially for their adhesives and adhesive technology," Alex asserts. "I have the utmost respect for the brand and the chemists, Drs. Byoung Suh and Liang Chen, among others, who developed All-Bond Universal." The company offers many high-quality educational opportunities, both at BISCO'smodern teaching facilities and online.

As dentistry moves forward, Alex sees progress being made on the incorporation of bacteriostatic and bactericidal agents directly into adhesive formulas and/or antibacterial agents being used during the restorative protocol. "The hope is this will help reduce or eliminate bacteria that may contribute to recurrent or new carious lesions," he suggests. "Also, many of these antimicrobials have been shown to reduce enzymatic matrix metalloproteinase (MMP) activity, which may be a primary reason adhesive interfaces fail over time."

Alex is confident BISCO will be helping lead the way in these and other technological advancements, and is no doubt pleased that products like All-Bond Universal have brought dentistry a long way since those early days in his father's home office. 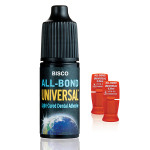