Combination syndrome (CS) is a dental condition commonly seen in patients with a completely edentulous maxilla and partially edentulous mandible with preserved anterior teeth. Overgrowth of the tuberosities, papillary hyperplasia of palatal mucosa, and decreased occlusal vertical dimension are typically associated with this syndrome. This article describes a case report where the patient was showing initial signs of CS with irritation from an ill-fitting maxillary denture and a loose mandibular acrylic partial denture. As part of the treatment, implant-supported abutments were used to stabilize the maxillary denture, and implants were placed in the posterior mandible to prevent further resorption. The case demonstrates the use of LOCATOR R-Tx® abutments (Zest Dental Solutions) to enable the patient to regain her smile and confidence, showing the versatility of these overpartial abutments.

A 60-year-old healthy woman presented with a chief complaintthat she was unable to eat without worrying about her existing dentures falling off. The patient said she was no longer capable of effectively chewing and was tired of wearing traditional dentures, which she had been using for years. She was missing her posterior mandibular teeth, Nos. 17 through 20 and 29 through 32. She claimed she had forgotten how it felt to eat a "normal" meal in the company of others without worrying about complications both during and after eating. She was also concerned about the esthetics of her teeth (Figure 1 and Figure 2).

Radiographic findings included minor resorption on the posterior mandible and initial signs of Combination syndrome (Figure 3). Combination syndrome is a dental condition common in patients with a completely edentulous maxilla and partially edentulous mandible with preserved anterior teeth. Typical symptoms of this syndrome are overgrowth of tuberosities, papillary hyperplasia of palatal mucosa, and decreased vertical dimension of occlusion (VDO).1 Despite this, bone height in the anterior premaxilla and posterior maxilla was still excellent. A root tip at tooth No. 5 left from a previous extraction years ago appeared to be asymptomatic but had some radiolucency surrounding the apex. Overall, D3 type bone quality was evident on a 3-dimensional (3D) cone-beam computed tomography (CBCT) scan with no pathology or suspicious radiographic anatomy.

Clinical evaluation of the patient found that her previous denture had caused irritation and sore spots on the maxilla. The patient was unhappy with the size of her old denture and teeth, saying that the denture took up too much space in her mouth because of its bulk and palatal thickness. Papillary hyperplasia noted in the anterior maxilla was due to excess pressure from the lower anterior natural teeth hitting against the ill-fitting maxillary denture.

The diagnosis was complete edentulism of the maxilla except for the root tip at No. 5 that had been left from a previous extraction. Partial edentulism in the posterior mandible had led to Combination syndrome phenomenon, including extrusion of lower anterior teeth, loss of posterior bone under the partial denture base, loss of anterior bone in the maxilla, overgrowth of tuberosities, collapse of VDO, and papillary hyperplasia of the anterior palate. The patient was diagnosed with class III pseudoprognathism and an altered facial appearance.

The prosthetic diagnosis was an ill-fitting maxillary denture and a loose mandibular acrylic partial denture that was covering distal extension.

The primary goal of treatment was to improve the quality of the condition of the patient's mouth at a price the patient could afford, as she had explained that finances were a concern. The secondary goals were to stabilize the maxillary denture using implant-supported abutments and to provide a mandibular cast-metal partial denture with bilateral posterior implants to further enhance the retention and stability of her partial.

The treatment plan was as follows: In the maxilla, surgery would be conducted for extraction of the remaining root of the upper right first bicuspid (No. 5) with simultaneous freehand placement of four root-form implants (Laser-Lok®, BioHorizons, biohorizons.com) in the upper jaw, two in the anterior and two in the posterior. The prosthesis would comprise four LOCATOR R-Tx® overdenture abutments (Zest Dental Solutions, zestdent.com) for an overdenture along with fabrication of a vitallium cast-metal-reinforced palate for extra stability.

In the mandible, surgery would entail placement of two implants (Laser-Lok) in the posterior region, one on each side in the vicinity of the first molars, to prevent future posterior bone loss and provide increased stability for a new cast-metal partial denture. Prosthetically, two LOCATOR R-Tx overpartial abutments would be used on the implants to support the new cast-metal partial denture.

The patient presented for placement of implants in the upper jaw to accommodate a complete overdenture and in the lower jaw for the cast-metal overpartial. All of the implants would eventually be supported by LOCATOR R-Tx abutments. The patient was given oral sedative medicine for limited conscious sedation. A 1-mg alprazolam tablet was crushed and administered to the patient sublingually.

Postoperative photographs and a radiograph taken 1 week post-surgery are shown in Figure 5 through Figure 7.

The patient's existing denture was continuously soft-relined and adjusted as needed for the healing period of about 5 months post implant placement.

To start the fabrication of the prostheses, impressions were taken for the lower and upper jaws. The impression trays used (CHAIRSIDE® Massad® Edentulous Trays, Zest Dental Solutions) were selected because they are moldable and easy to fit to the patient's jaw, and they capture a good border molding.

After the maxillary overdenture and mandibular overpartial were fabricated, they were retrofitted chairside using a soft, silicone-based reline material (CHAIRSIDE® Soft Reline Material, Zest Dental Solutions) designed to capture the housings of the LOCATOR R-Tx.

As in this case, after tissue conditioner is placed and the dentures relined, the author typically gives surgery patients two separate dentures. The first is a healing denture or what may be called an immediate denture. The patient wears the healing denture for about 4 to 6 months, until all of the surgical area heals completely. At that point new alginate upper and lower impressions are taken for the final denture. In this final denture stage, the patient will receive a wax try-in to enable modifications based on how he or she wants the teeth to appear, and the patient's bite relationship is checked. The healing denture normally takes approximately 5 to 7 business days to make. At least 1 week before surgery, upper and lower impressions are taken, and a wax bite (bite registration) is sent to the laboratory (Oral Arts Dental Laboratories, oralartsdental.com). The clinician also discusses the patient's case with the lab technician, including how much bone will need to be reduced at surgery so there is enough room for the denture after implant placement.

The prosthethic phase of this case is summarized pictorially in Figure 8 through Figure 19.

The patient had natural teeth in the lower arch, and the upper arch was edentulous. When placing upper implants, it is important that maxillary bone is reduced sufficiently so that the patient has enough room to accommodate the implant-retained denture. When the patient has an over-implant denture, the height of the implant, abutment, and housing must be considered; the height of these components will also depend on how much room may be needed for adjustments to the overdenture itself.

When a patient is fully edentulous, requiring upper and lower complete dentures, the height can be adjusted for both dentures. This patient, however, had lower natural teeth, which meant that the clinician was unable to change the height of the lower jaw. Therefore, before implant placement, the clinician needed to be aware of these conditions so that the final denture would have sufficient room for the implant, abutment, housing, and acrylic denture to allow the patient's bite to be mechanically accurate and cosmetically pleasing.

In this case the patient's desire was for an economical restorative option yet be able to save her remaining teeth. Overpartials are a well-suited option for patients, like this one, who wish to prevent lower bone loss posteriorly. LOCATOR R-Tx abutments were selected for this case because this abutment has the versatility to be able to be picked up in the prosthesis, such as dentures and partials, and it provides patients a high degree of stability and retention. In the author's view, this approach is underutilized, because for many edentulous patients two implants in the lower jaw may suffice, which would in the least save them some time to come back and perhaps use those implants in the future and have screw-retained fixed crowns placed on them if they wanted to replace more teeth as a fixed prosthetic. Thus, these abutments allow patients to have alternative options available to them and yet can be predictably restored for other prosthetics in the future.

The rationale for placing implants in the posterior mandible was to prevent future resorption. This case study showed the use of LOCATOR R-Tx abutments and how the treatment was able to help the patient regain her smile and confidence. The patient was able to chew effectively and enjoy eating again, thus improving her quality of life. The overpartial abutments showed versatility and are a well-suited option for patients who could benefit from this type of treatment while keeping economics in mind. 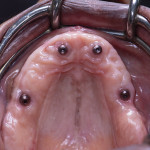 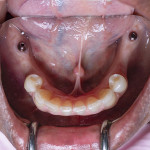