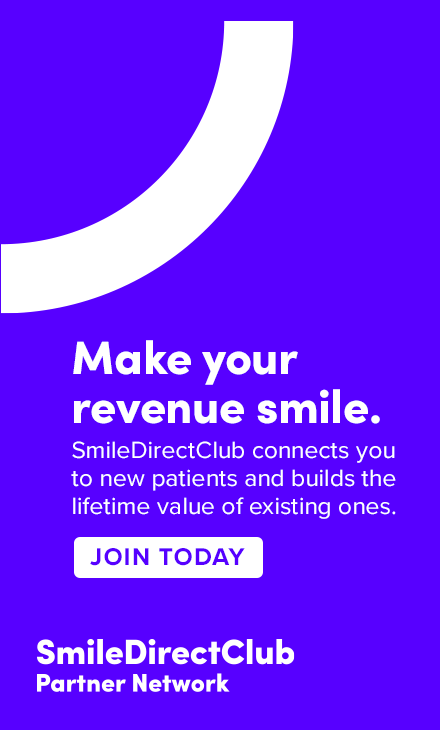 Successful Use of Orthodontic Extrusion in an Esthetically Challenging Case

Abstract: The use of orthodontic extrusion can be advantageous for creating a favorable periodontal and restorative environment while avoiding extensive bone and soft-tissue grafting. This approach is demonstrated in the case of a young woman who presented with discomfort and concerns over her maxillary central incisors. Additionally, the orthodontic treatment corrected occlusal dysfunction and slight crowding. Interdisciplinary, facially generated treatment planning was critical to the final esthetic result and the reduction of biomechanical, functional, and dentofacial risk factors.

Orthodontic extrusion can be used to create a powerful advantage in improving a patient's periodontal and restorative environment. Moreover, it can do so with either minimal or no need for bone and soft-tissue grafting. In this case, adequate space and esthetic emergence was required so that dental implants could be used to replace structurally hopeless maxillary central incisors. A three-phase treatment sequence that comprised orthodontic and periodontal therapy, extraction and implant placement, and provisional and final restorations would be implemented to achieve a successful outcome, which included an attractive appearance, healthy gingiva, good bone density, and improved occlusion.

A 28-year-old female patient presented with discomfort and frustration regarding her maxillary central incisors (Figure 1). After a bicycle accident in her youth, the patient had endodontic therapy, and full-coverage crowns were used to restore teeth Nos. 8 and 9. She suspected that the central incisors had problems and was unhappy with their appearance. She expressed an interest in considering the use of implants to replace them.

During diagnosis, it was confirmed that teeth Nos. 8 and 9 were, indeed, hopeless but that implant placement in these sites would require orthodontic intervention. Furthermore, it was determined that orthodontic therapy could be used to reduce other dental risk factors as well, and the patient's esthetic goals could be realized with porcelain veneers on her adjacent lateral incisors. Additionally, this approach would make procedures more efficient, with fewer appointments needed and all treatment provided at one office, which the patient greatly appreciated.

The patient's medical history was unremarkable except for a history of previous smoking; thus, she was considered American Society of Anesthesiologists (ASA) I. At least one study correlates previous smoking and periodontitis1; therefore, this warranted diagnostic consideration. The patient's dental history included a 9 out of 10 fear of dental care,2,3difficulty with adequate local anesthesia, and being self-conscious about the appearance of her teeth. She reported a history of caries and temperature sensitivity, and, functionally, she described a feeling of having more than one bite; she had to squeeze and shift to get her teeth to achieve maximum intercuspation (MIP).

Periodontal: The patient had not been regular with her previous dentist and presented with evidence of periodontal disease. Specifically, she had mild attachment loss; recession on teeth Nos. 3, 6, 10, 13 through 15, 24, and 29; 4 mm pockets on 18 sites; and bleeding on probing on 11 teeth. Previous smoking could be considered as a potential risk.1

Biomechanical: Active caries were present on teeth Nos. 13 and 29. Splinted crowns on teeth Nos. 8 and 9 were defective with open margins, recurrent decay, and ceramic fracture (Figure 2). Teeth Nos. 2 through 4 and 13 had questionable amalgam fillings. In addition to the endodontically treated teeth Nos. 8 and 9, structural compromises were evident on teeth Nos. 18 and 31 due to large indirect ceramic inlays that comprised more than one-third of the occlusal isthmus. The most serious concerns were apical bone loss and cyst formation around the roots of Nos. 8 and 9. The roots of teeth Nos. 7 and 10 were tilted mesially, significantly crowding the central incisor roots.

Functional: Wear from attrition was evident on the anterior teeth, and teeth Nos. 8 and 9 had chipped porcelain. The patient reported no temporomandibular joint symptoms, and evaluation, including range of motion, loading, and immobilization testing, revealed no joint concerns. The aforementioned conditions, her dental history, in particular her description of having more than one bite and needing to squeeze to fit her teeth together, and the functional analysis pointed to a diagnosis of occlusal dysfunction.

Dentofacial: The lip line, even with a relaxed smile, revealed a significant gingival display. With full smile, both upper and lower posterior teeth and gingiva were clearly visible (Figure 3). The patient was unhappy with the appearance of the crowns on teeth Nos. 8 and 9, especially their attrition and chipping. She also disliked the crowding of her lower anterior teeth. The patient was also informed that she had a mild horizontal plane cant when she smiled, which went downward from her right to left, and that conventional orthodontic treatment would be unable to change this, though she was not concerned with this issue.

The primary goal was to establish adequate space and esthetic emergence for dental implants to replace the structurally hopeless teeth Nos. 8 and 9. Because of the mesially tipped roots on the lateral incisors, orthodontic therapy would be required to meet the primary goal. Due to the potentially severe loss of supporting bone and tissue after extractions of teeth Nos. 8 and 9, gradual orthodontic extrusion would be utilized to maximize the regenerative capacity of bone and tissue and create an environment for proper esthetic and structural architecture for the planned implants at sites Nos. 8 and 9. Secondarily, the orthodontics presented the opportunity to straighten the patient's lower incisors and establish a comfortable occlusion while reducing risk for occlusal dysfunction.

The patient was treated with scaling and root planing and post periodontal follow-up 2 months later. A 4-month recall was prescribed.

For the initial healing phase, the roots of the extracted teeth were shortened and shaped to form ovate pontics coronal to the new implants. The provisional crowns, still cemented to the roots, were secured to the arch wire (Figure 8). The use of the ovate pontics helped maintain tissue support and emergence profile over the implants.

After 8 weeks of healing, brackets and the extracted tooth pontics were removed. Gingival tissue had migrated between the implants and the pontics (Figure 9). This tissue was removed and screw-retained acrylic provisional restorations were placed to maintain implant access and the pontic site contours (Figure 10). These provisionals were left in place for 4 weeks. Esthetic gingival contouring on teeth Nos. 7 and 10 was accomplished, and final impressions were then taken. Laboratory-fabricated abutments were then placed, and layered lithium-disilicate crowns and veneers (e.max®, Ivoclar Vivadent, ivoclarvivadent.com) were cemented (RelyX Unicem).

Use of milled titanium and lithium-disilicate abutments (Figure 11) helped create a strong titanium substructure with esthetic abutment design to achieve the optimum shade match for all four restorations and minimize tissue discoloration.

The patient's decision to complete the somewhat protracted treatment as presented was rewarded with successful results, which included an attractive appearance, healthy gingiva contoured properly around the dental implants (Figure 12), good bone density to support the implants, improved occlusion, and relief of crowding in the mandibular anterior teeth. Bone density was achieved primarily using the body's natural healing mechanisms through slow extrusion of compromised teeth and minimal socket grafting. The extrusion also aided the development of good supportive gum tissue so the dental implants could be placed with attractive and healthy papillae (Figure 13). With the regrowth of bone around teeth Nos. 8 and 9 the esthetic prognosis improved significantly.

Biomechanical risk was decreased through the removal of the two failing central incisors; however, due to the active carious lesions on teeth Nos. 13 and 29 at presentation, the patient remains high risk for caries for up to 3 years.7 She was placed on prescription fluoride gel (CTx4, Carifree, carifree.com). At the time of this writing, teeth Nos. 18 and 31 retained the large, structurally questionable restorations, though carious teeth were remedied and the two compromised central incisors were removed. The dental implants on teeth Nos. 8 and 9 were secure with good bone around them. All of the patient's amalgam fillings were replaced. The risk will be lowered further when the patient chooses to replace the restorations on Nos. 18 and 31. Biomechanically, the overall prognosis was good.

Functional risk was mitigated with orthodontics, which relieved crowding in both the maxillary and mandibular arches and created simultaneous, bilateral, equal intensity posterior contacts-a "home" position. After treatment, the patient was asked to complete a functional risk questionnaire.8 She reported she no longer had to "squeeze" to achieve MIP, and no longer felt as though she had more than one bite. The functional diagnosis, therefore, was acceptable function and the overall prognosis was good.

With regard to dentofacial risk, the patient's high lip line will always remain high. However, the treatment was managed well despite the risk. Orthodontic extrusion of the central incisors preserved bony architecture and averted a potentially poor esthetic result. The new dental implant restorations are highly attractive, and the gingival tissue and papilla height around the implants remains healthy and full, creating a natural appearance.

In conclusion, it is important to note that all phases of this treatment were facilitated by the three authors at one practice, with each clinician performing different aspects of the treatment plan. (TSR was responsible for the orthodontic treatment; NAR, a periodontist, performed the extractions and dental implant placement; and SLR acted as coordinating dentist and was responsible for the final restorations.) Appointments were kept to a minimum, and multiple procedures were able to be completed in efficient timeframes as scheduled. Such practice efficiencies may enable fees to be set at a value that benefits the patient while still allowing the practitioner to be properly compensated.