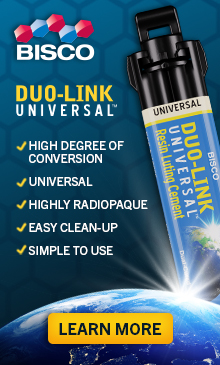 Alginate impression (irreversible hydrocolloid) material is commonly used in dental practice because it is easy to mix, low in cost, and well tolerated by patients. The material is not dimensionally stable, however; thus, it is necessary to pour the impression immediately after the molding is accomplished, or within 60 minutes if the impression is kept in 100% humidity. Excessive contact of the alginate impression with the cast model over time may affect the model’s properties. In this study, the authors tested the effect of contact time between an alginate impression and type III dental stone on cast model properties. Sixty-seven cast models were obtained from a stainless steel cylinder by using irreversible hydrocolloid impression material and type III dental stone. Thirty-seven cast models were separated from the impression after 1 hour (control group) and 30 cast models were separated after 6 hours (study group). The samples were evaluated under light microscope for surface details and measured by digital caliper for dimensional stability. An indentation on the cast was made and the depth of the indentation was then measured with a digital caliper to measure hardness. The dimensional stability of the cast models was not affected when contact time was increased from 1 hour to 6 hours (P = .507). Surface details did not deteriorate when contact time was increased, as all of the samples could reproduce all details after the 1-hour and 6-hour interval periods. However, hardness was greater after 1 hour of contact time (P = .001) than after 6 hours of contact time. In conclusion, contact between alginate impression material and type III dental stone up to 6 hours did not affect the dimensional stability and richness of the surface; hardness, though, was significantly affected.

Cast models and dies are used daily in dental practice for many purposes, such as diagnosis, treatment planning, patient education, communication between clinicians and technicians, fabrication of custom trays, dental restorations, and orthodontic appliances.1-5 An impression is made to accurately record oral tissues and their spatial relationship. The impression is then poured using dental stone or other suitable materials to obtain a positive replica (ie, cast models and dies).1,3,4

Alginate consists of a powder containing calcium or potassium sulfate and filler as primary components.3,9,10 Alginate impressions contain water, which inhibits the setting of the gypsum material at the surface. In addition, alginate produces insoluble alginate and sodium sulfate during the gelation process.11

Dental stone is extensively used in dental laboratories because of its low cost and easily modified properties.12 Chemically, dental stone is a mineral composed of calcium sulfate dihydrate. The gypsum used for dental applications is nearly pure calcium sulfate hemihydrates, produced by calcination of calcium sulfate dihydrate.11-13 According to ADA specification No. 25, there are five types of gypsum products for dental uses. One of them is type III dental stone, which is used as cast and/or die material to construct prostheses and has high strength and slight setting expansion.11,14 Type III dental stone sets when mixing the powder particles with water. That reaction process is an exothermic chemical reaction.11,12,15,16

The requirements of ideal gypsum casts and dies include accurate reproduction of details, dimensional stability over time, enough hardness strength to withstand the fabrication process, and being resistant to inadvertent abrasions that may occur during fabrication.12,13 According to ADA specification No. 25, detail reproduction is satisfactory when a copy line of 50 µm in diameter is reproduced continuously across the stone.14 The recommendation is to immediately pour the alginate impression with dental stone to avoid dimensional changes; however, pouring can be delayed up to 60 minutes if the impression is kept in 100% humidity.6,17

This study was designed to investigate the effect of contact time between alginate impression material and type III dental stone on cast model properties after 6 hours. To the authors’ knowledge, this is the first study to do so. The properties investigated were dimensional stability, detail reproduction, and hardness.

A stainless steel cylinder was fabricated according to ADA Specification No. 18 for alginate impression material. The dimensions of the cylindrical model were 25 mm in width and 15 mm in length with three reference lines in surface. The references lines were 75 µm (labeled A); 50 µm (labeled A'); and 25 µm (labeled A") in width and 2.5 mm apart from each other. These lines were used for estimating surface detail. Two bisecting lines (x and x') were also marked on the surface to test the dimensional stability by measuring the distance between them (Figure 1).

Ten special trays were fabricated from chemical-cure acrylic resin (Superacryl Plus, SpofaDental, spofadental.com). To ensure equal thickness of the impression material, two sheets of wax, about 2.8 mm in width each, were added around the cylinder. At the dough stage, the acrylic resin was adapted over the wax. After the acrylic set, the special trays were finished and perforated. All impressions were made using high-precision chromatic alginate (Alginmax®, Major Prodotti Dentari, S.p.A., majordental.com). The manufacturer’s instructions were followed regarding mixing and working time, as well as powder and water ratio.

The properties tested were dimensional stability, surface details, and hardness. Dimensional stability was examined by measuring the distance on the cast between x and x' along the 50-µm line using a digital caliper (Digital Caliper, Hornady, hornady.com). Surface details were evaluated by reproduction of A, A', and A", according to the scores index (Table 1). Evaluation was performed under 4X magnification microscope and 100-watt artificial light (VanGuard, VEE GEE Scientific, veegee.com). Hardness was assessed with the digital caliper by measuring the depth of the indentation made by 997 Newton in 15 seconds. The casts were mounted on the testing machine (Avery's Brinell Hardness Tester, W&T Avery, Birmingham, England) to accommodate the hard ball indenter along the 50-µm line.

One examiner carried out all the tests. Three measurements were taken and the mean was calculated and used for the final analysis.

All lines used for surface detail evaluation (Table 1) were clearly duplicated by the two groups. No further test was used to explore the significance of differences between the groups.

Although alginate impression material has dimensional stability problems, it can produce an accurate stone cast if handled properly.6,17,21,22 Separation of the cast after a short period of contact time will produce a cast with good properties in terms of surface details, dimensional stability, and hardness. Some previous studies investigated the effect of 12-hour6 and 9-hour19 contact times on these properties. To the best of the authors’ knowledge, this study is the first to investigate the effect of 6-hour contact time on cast properties. The study group (6-hour contact) results showed no significant changes in detail reproduction and dimensional stability when compared to the control group (1-hour contact). However, there were significant differences regarding hardness of the resultant casts.

Finally, the hardness readings showed significant decrease with increased contact time (P = .001). This result is in agreement with the previous studies. Thus, the resultant casts after 6 hours of contact with alginate impression material appear to be more brittle than those that had 1 hour of contact.

Cast models and dies made of dental stone and used for cast dental restorations must provide dimensional stability, strength, and resistance to abrasion and must reproduce surface details.23 Alginate impressions, however, have dimensional stability problems over time because of water loss, which leads to surface roughness of the gypsum cast model.5 Good properties of cast models can be achieved by following the recommendations of pouring the dental stone immediately after the impression has been made or anytime within 60 minutes if the impression is kept in 100% humidity.

Though no significant changes in dimension or surface details were observed in the study, the hardness of the dental casts was significantly lower after 6 hours of contact time with the alginate impression compared to 1 hour of contact time. This may affect a cast’s strength and resistance to abrasion.