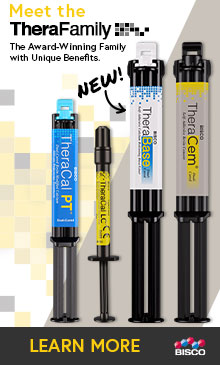 Minimizing Risk While Adapting to Treatment Complications: A Case Report

Abstract: Functional diagnoses can sometimes be ambiguous. An occlusal disorder may be paired with a parafunctional condition, as in the case presented, which features a patient who experienced anterior tooth chipping and thinning of maxillary incisal edges. The case demonstrates the principles of risk-based treatment planning and discusses challenges involved in identifying and evaluating all the evidence to maximize restorative treatment plan success. In this case, functional risk during mastication was reduced using orthodontic therapy, and a nightguard was employed to combat destructive forces during sleep. Feldspathic veneers were used to decrease the esthetic risk. The case also offers an approach for addressing unforeseen treatment complications without increasing risk for further potential problems.

Clinicians cannot always be certain that their initial diagnosis and risk evaluation will lead to the most predictable treatment. Functional diagnoses may not always be clear cut or fit neatly into just one category. In the following case, the principles of risk-based treatment planning are demonstrated, as are the difficulties that can be experienced when identifying and evaluating all the evidence when endeavoring to ensure a successful restorative treatment plan. The case report also presents a strategy for resolving an unexpected treatment complication without increasing the patient’s risk for future problems.

A 35-year-old male patient presented with concerns about the chipping and thinning of his maxillary incisal edges, and he was also unhappy with the general appearance of his teeth (Figure 1 and Figure 2). His medical history was noncontributory, but his dental history identified concerns and symptoms that possibly suggested a diagnosis of constricted envelope.1 He reported that an equilibration had been initiated about 10 years prior, but it was never completed, because during the process, he experienced increasing discomfort, tension headaches, sore teeth, and jaw problems. He further reported that when clenching his teeth, or as he said, “When I bite my teeth together,” he did not feel them “all touch.”

He also reported that over the previous 5 years, he had noticed his front teeth becoming thinner and chipping, and he experienced discomfort chewing foods such as bagels and hard breads, as well as chewing gum. The patient also noted that he would sometimes awaken with an awareness of his teeth, and when he removed his nightguard in the morning, his front teeth were his only contacts.

Diagnosis, Risk Assessment, and Prognosis Periodontal: There was radiographic evidence of less than 2 mm loss of bone and no periodontal pocket depths greater than 4 mm. Slight recession and abrasions were present on the facial of tooth No. 9, which were due to an anatomic problem, not disease. A diagnosis of AAP type II periodontal disease was noted.
Risk: Low
Prognosis: Good

Biomechanical: No caries or defective restorations were noted. The only restorations present were small amalgams on the posterior teeth, which comprised less than one third of the isthmus width of the tooth. Some isolated minor areas of erosion were also noted (Figure 3).
Risk: Low
Prognosis: Good

Functional: Wear facets were present on the facial aspects of the mandibular anterior teeth, and distinct ledges were noted on the palatal surfaces of the maxillary anterior teeth. Minimal (less than 1 mm) posterior wear was noted (Figure 4 and Figure 5). The areas of moderate attrition from normal forces were consistent with a diagnosis of a constricted chewing pattern, which is associated with a moderate functional risk.
Risk: Moderate
Prognosis: Fair

Dentofacial: Medium lip dynamics were noted on both the upper and lower arches; the patient wanted to modify the color of his teeth; and some rotations and diastemas were present.
Risk: Moderate
Prognosis: Good

After deprogramming with a Kois deprogrammer, the mandible moved anteriorly, confirming the working diagnosis of a constricted envelope of function. The deprogrammer platform did exhibit streak marks, which could indicate parafunction, but the wear could not be duplicated on the teeth. The destructive wear on the front teeth (thinning) was not associated with the lateral excursive movements of parafunction. Although a parafunction habit could not be completely eliminated in the diagnosis, the active destruction of the incisors resulted from the adaptation typically seen with a constricted chewing pattern.

Cephalometric tracings were completed prior to and after implementing the deprogramming protocol (Figure 6). Although the cephalometric radiograph did not diagnose or determine the direction of treatment, it was an important guideline for treatment and helped confirm the constricted chewing pattern diagnosis. The orthopedic position of the mandible after deprogramming was significantly anterior in a comparison of the pre- and post-deprogrammed tracings. Additionally, the reading from the upper central to SN (sella-nasion) was measured at 100 degrees, and the interincisal angle measured 142 degrees, slightly deviating from the expected norms.2

Considering the patient’s diagnosis and risk profile in the four major areas highlighted above, the various treatment options were carefully evaluated and selected, with the patient’s informed consent.

After stabilization, the patient wore a deprogrammer for 3 weeks. When deprogramming was confirmed, there was no change in the orthopedic position of the mandible. This suggested that the orthodontic therapy had created a more favorable relationship among the anterior teeth and released the constriction. It was now possible for an occlusal equilibration to be performed utilizing the deprogramming appliance.3 Ultimately, restoration of the anterior teeth and the worn-away tooth structure would be accomplished with enamel-bonded feldspathic veneers.

Management of the possible parafunction was enhanced by flattening the guidance on the anterior restorations to minimize the risk of porcelain failure. The preparation design for restorations on the palatal of the maxillary incisors was determined by the existing wear facets, which minimized any further reduction (Figure 8). The cingulums of the incisors remained intact, and the facial and proximal preparations remained mostly in enamel. This design reduced the biomechanical compromises to the teeth4 (Figure 9 and Figure 10).

The slight spacing created between the maxillary anterior teeth when they were flared labially in the orthodontic phase necessitated proximal preparation of the maxillary incisors. Spaces distal to the cuspids were not closed, as the patient concurred that they were not an esthetic compromise.

Because of the patient’s medium lip dynamics and moderate esthetic risk, the facial recession and abrasions on the maxillary left central incisor was judged to be only a minor esthetic concern. The cervical margins were therefore prepared to remain slightly supragingival and entirely in enamel. Transparent porcelains were used at the cervical margin of the restoration, which allows the restoration margin to blend with the underlying tooth structure. It then becomes almost undetectable in a patient’s smile and is an ideal way to treat supragingival restoration margins in esthetic areas.

The mandibular cuspids required restoration of the incisal edges to re-couple with the maxillary cuspids and restore normal guidance. Only minimal facial tooth preparation was required, with the final restoration redefining the incisal portion to restore the tooth structure that was lost from attrition. The cervical margins remained supragingival in enamel, and no proximal reduction was required. The patient requested restoration of the incisal edges of the mandibular incisors to cover the exposed dentin. The preparations were completed with a reduction strategy similar to that of the mandibular cuspids.

All restorations were bonded using total-etch adhesive bonding protocols. After bonding was completed, the occlusion was refined to create bilateral simultaneous contact in centric relation, with the cuspids and posterior teeth holding shimstock while the incisors allowed the shimstock to pull through. While sitting up with 200-µm horseshoe paper between his teeth, the patient chewed on the paper to reveal any heavy streaks, which would indicate anterior interferences. This served to refine the function on the lingual surfaces of the maxillary anterior teeth and establish a smooth pathway into maximum intercuspation (MIP).

Diagnosis and Treatment of Unexpected Complication

Within 3 months of treatment completion, the patient returned with a fractured veneer at the disto-incisal of tooth No. 27 (Figure 11). He reported that the fracture had occurred while he was asleep. The veneer was remade and bonded, with the guidance further flattened on the patient’s right side to decrease friction. A similar fracture occurred again within the following 3 months, again during sleep.

The episodic nature of this patient’s parafunction and the preoperative wear pattern on his dentition served to mask the presence of the destructive forces of parafunction. Thus, the existence of periodic parafunction, which presents with an increased functional risk, had to be considered, even if the pattern of attrition on the teeth was from the constricted chewing pattern. Interestingly, the fractures occurred during sleep. This is indicative of a nocturnal sleep disorder, such as parafunction, rather than a daytime occlusal disorder or adaptation, as in a constricted chewing pattern. The fracturing occurred only on the tooth most at risk, the mandibular cuspid, a tooth designed and positioned to handle the lateral loading to the system.5 However, this tooth was covered with a porcelain veneer, which was unable to handle the parafunctional forces. The opposing maxillary cuspid received the load on the palatal surface, where the enamel was intact. Because the preparation removed very little enamel, the veneer restoration—not the tooth—was at increased risk of fracture.

The anterior restorations and dentition ultimately required protection with a flat nightguard (Figure 12). Since placement of the nightguard, lateral grooves have appeared on it, confirming the diagnosis of sleep bruxism. In the 9 years since the completion of the treatment and delivery of the nightguard, there have been no further failures in the restorations.

This case demonstrates that when there is a restorative failure despite a thorough risk-based treatment design, a reevaluation of the diagnosis and further analysis is critical to ensure long-term success. When faced with restorative fractures, rather than change the design of the restorations and increase biomechanical risk, clinicians should consider episodic parafunctional forces and management with a nightguard.

It is important to remember that patients can have more than one diagnosis; as in this case, they can have an occlusal disorder and a parafunctional disorder. Destructive forces during sleep can be more predictably managed with a nightguard.

As of the time of publication, the patient’s periodontal risk remains low and the prognosis is good. Recare management continues at 6-month intervals. The biomechanical risks were not increased by the orthodontic repositioning, which allowed room for minimally invasive, enamel-supported restorations to replace missing tooth structure. The functional risk during mastication has been reduced using orthodontic therapy to create a more favorable horizontal position of the anterior teeth and relieve the constricted chewing pattern. The destructive forces during sleep have been managed with a nightguard. The esthetic risk has been decreased with the use of feldspathic veneers, which provide a translucent restoration design that more easily replicates natural tooth vitality with a translucent zone to hide the cervical margin.

This diagnostic and treatment approach resulted in successful restoration of the patient’s teeth (Figure 13 through Figure 15). At the time of publication, the final restorations have continued to be esthetic and functional, with no increased risk to the oral system.The patient wears the nightguard nightly, and there have been no further fractures or chipping in 9 years. By properly restoring the dentition breakdown that resulted from daytime chewing and nighttime grinding, the final result decreased the risks to the patient’s dentition, and a long-term successful outcome is expected to be maintained.

The author would like to thank John C. Kois, DMD, MSD, for his clinical expertise in the completion of this treatment and for his vision and leadership in risk-based patient management. Additional thanks go to Brett C. Fidler, DDS, MSD, for completing the orthodontic treatment.