Abstract: An angled narrow-diameter implant has been introduced for use in cases where the atrophic edentulous ridge is wide enough to accommodate narrow-diameter implants but the necessary implant angulations would make it impossible to fabricate an esthetically acceptable overdenture. A case is described in which such implants were placed and restored.

Dentists have traditionally restored function to their completely edentulous patients by fabricating removable, tissue-supported dentures.1 However, achieving adequate retention and stability has been a persistent challenge.2,3 The alternative of supporting and retaining removable overdentures with dental implants has become well established, with long-term successful outcomes amply documented.4-7

An implant diameter of more than 3 mm became accepted as the standard for endosseous implants—commonly referred to as standard-diameter implants—long ago. Moreover, additional alveolar ridge width is required to ensure that sufficient blood supply is present to support successful osseointegration with minimal crestal bone resorption.8,9 Clinical guidelines state that at least 1 mm to 1.5 mm of peri-implant bone volume should be present. If the edentulous ridge is too narrow, surgical procedures such as ridge splitting or bone grafting may be undertaken to obtain the necessary width. However, some patients are fearful of the complexity of the procedure, with its perceived invasiveness and additional time requirements, or the added cost of these bone augmentation procedures. For these patients, another alternative is to use narrow-diameter implants (less than 3 mm in diameter).

Fast-forward to today, and contemporary narrow-diameter implants consist of designs that more closely replicate those of standard-diameter designs, including utilizing both two- and one-piece designs. Still, there is limited or no choice among abutment types.16 While the contemporary designs are an improvement on earlier designs, these implants are still inappropriate for some indications.

A new one-piece, narrow-diameter implant was recently introduced with a 20-degree angled option (SATURNO™ Narrow Diameter Implant System, ZEST Anchors, www.zestanchors.com) that can address challenges associated with implant placement in the maxillary ridge. The following report describes a case in which use of one-piece angled narrow-diameter implants enabled flapless treatment of a patient with a resorbed maxilla.

The 45-year-old female patient presented seeking a replacement for an unsatisfactory maxillary denture that she had received 2 years earlier, after extraction of her last remaining maxillary teeth (Figure 1). A smoker, she underwent clinical and radiological examination that revealed bilateral sinus pneumatization. Her premaxilla was angled, with a pronounced buccal undercut. A computed tomographic (CT) scan confirmed the buccal concavity and the slope of the premaxilla (Figure 2).

Although the ridge width was sufficient to accommodate narrow-diameter implants to support an overdenture, placing such implants to follow the long axis of the triangle of bone would have created excessive buccal lip contours. To correct the buccal concavity, a ridge-splitting procedure or augmentation with bone-graft particulate and tent screws was recommended. However, the patient declined, citing financial limitations.

An alternative plan was then recommended in which six 2.9-mm-diameter and 10-mm-length 20-degree angled narrow-diameter implants with a 4-mm cuff height (Figure 3) would be placed using a flapless surgery. This would enable a full maxillary overdenture to be situated more lingually, creating a normal and esthetically pleasing appearance. The patient provided informed consent.

Placement of the six implants was planned using a 3D model created from the CT scan data (Figure 4 and Figure 5). Because of the sinus pneumatization, it was necessary for all six implants to be located in the anterior, rather than spread more evenly throughout the arch. A surgical guide (3DDX Surgical Guide, 3D Diagnostix, www.3ddx.com) for coDiagnostiX™ (Dental Wings GmbH, www.codiagnostix.com) was designed and fabricated to facilitate the flapless placement. On the day of surgery, this was secured using fixation pins (Figure 6).

At each of the intended implant-placement sites, the 2.1-mm drill included in the SATURNO surgical kit was used to create an osteotomy that was approximately 5 mm deep. The surgical guide was then removed, and placement of the angled implants began. Figure 7 was taken immediately after the surgeon placed the one in the right maxillary central incisor site and inserted a SATURNO angled parallel pin in the left central incisor site.

The SATURNO Implant comes packaged with an implant carrier/mount (Figure 8) that is used initially to advance the implant into the osteotomy. When the resistance becomes too great, the surgeon should remove the mount completely and tighten the implant, using the ratchet wrench until fully seated (Figure 9). After all the implants were placed and correctly oriented (Figure 10), the patient’s existing denture was relieved and filled with soft liner to provide some retention during the healing period. Narrow-diameter implants can be loaded using an immediate or delayed protocol based on the stability of the implants at the time of placement and clinical evaluation. In this case, the author proceeded with a delayed protocol, delivering the final prosthesis at a later date.

Immediately after implant placement, a panoramic radiograph was taken (Figure 11). It confirmed that none of the implants were impinging on the sinus cavity. A postsurgical CT scan (Figure 12) confirmed that placement of the 20-degree angled implants followed the natural slope of the maxillary ridge, creating adequate prosthetic space.

The definitive overdenture was delivered approximately 6 weeks after the initial surgery. The SATURNO O-Ball design snaps into a pivoting race inside the denture cap, providing resiliency and up to 30-degree angle correction between implants (Figure 13).

The maxillary anterior bone resorption seen in the patient described here, with pronounced angulation, is a common pattern and one that poses a significant restorative challenge. Although surgical options exist for improving deficient ridge contours to enable more optimal implant angulation and better esthetic results, they all entail longer, costlier, and more traumatic procedures. These constitute hurdles that often prevent patients from proceeding with treatment, particularly elderly patients, who are also more likely to have medical conditions contraindicating surgery and/or economic constraints.

The SATURNO angled narrow-diameter implants employed in the case described here have the ability to solve the restorative challenge posed by alveolar resorption. Furthermore, they often can be placed with flapless procedures that reduce complications such as swelling, pain, and postoperative discomfort17 and result in shorter treatment times overall.18 The success of narrow-diameter implants has been well documented. A 2014 literature review that included 10 articles about narrow-diameter implants, which were followed between 12 and 96 months and placed using both flap and flapless surgeries, found survival rates between 90.9% and 100%.19 Other studies have reached similar conclusions.20

8. Tarnow DP, Magner AW, Fletcher P. The effect of the distance from the contact point to the crest of bone on the presence or absence of the interproximal dental papilla. J Periodontol 1992;63(12):995-996. 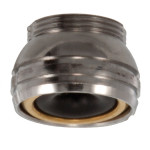