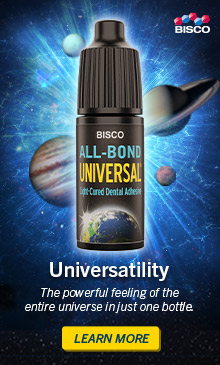 It has been reported that repeated connection and disconnection of transmucosal components stimulates apical repositioning of the soft tissues and marginal bone resorption. Limiting the number of times this occurs may be beneficial. A new treatment concept called “one abutment–one time” describes the placement of the definitive abutment at the time of surgery. This case highlights the susceptibility of excess cement residue associated with this concept and unesthetic outcome even when meticulous surgical correction is attempted.

Implants have become an important treatment consideration for the replacement of missing teeth in the partially edentulous patient. This could be attributed to the high success rates associated with dental implants.1 The demand for faster treatment and the search for improved esthetic outcomes through the preservation of bone and soft tissue have led to an evolution in implant therapy.

Modern implant therapy includes many different treatment protocols that do not follow traditional guidelines. These include the addition of a roughened titanium surface,2 immediate implant placement,3 and immediate loading or provisionalization.4 Immediate implant placement and provisionalization have some advantages, which include the combination of extraction, implant surgery, and restorative treatment. This may also theoretically improve esthetic results by decreasing the number of surgical interventions and by utilizing the provisional restoration as support for the gingival tissues.5

It has been reported that subsequent disconnections and reconnections of abutment components may compromise the mucosal barrier and result in a more apically positioned zone of connective tissue and increased bone remodeling.6 The additional marginal bone remodeling and soft-tissue recession may compromise the esthetic outcome. Conventionally, there are multiple component dis/reconnections throughout the treatment. This dis/reconnection process may involve many transmucosal components, such as the healing abutment, impression coping, provisional abutments, and final abutments. Recently, the connection of the definitive abutment at the time of surgery has been suggested (one abutment–one time).7,8 The goal of this treatment concept is to eliminate all of the dis/reconnections that occur with treatment. Some advantages of this treatment may include a faster treatment time, delivery of a provisional restoration at the time of implant placement, and a reduction in the number of appointments.

The following case report describes an immediately placed implant in combination with the immediate delivery of the definitive abutment and provisional restoration.

In April 2010, a 46-year-old man with a non-contributory medical history was referred by his general dentist to the periodontist. Tooth No. 10 was lost in 2007 as the result of a traumatic injury and was replaced with a three-unit fixed bridge. Tooth No. 9 eventually developed an oblique root fracture and was deemed hopeless. Although the patient was asymptomatic, there was a fistula in the No. 9 vestibular area (Figure 1).

The patient returned in August 2010 for extraction of No. 9, immediate implant placement, delivery of a final stock zirconia abutment, and immediate provisionalization. The provisional crown was adjusted completely out of occlusion and immediate loading was avoided.

The case was treated via a flapless technique. The existing bridge was first sectioned at the No. 9/10 joint, and the No. 10 pontic was allowed to remain as a cantilever off the No. 11 retainer. The fractured No. 9 root was carefully removed, preserving all existing alveolar bone (Figure 2). After meticulous debridement of the socket, the osseous crest was palpated to be 4 mm apical to the direct facial gingival margin.

A tapered, root form implant was placed after preparing and tapping the socket (Figure 3). A stock zirconia abutment was torqued down to the implant (Figure 4 and Figure 5). The gap between the buccal of the implant and the buccal socket wall was filled in with a bovine particulate bone graft material. The patient went directly to the general dentist’s office for a chairside, cemented, provisional crown.

The patient returned to the periodontist’s office 2 weeks later, at which time a “slight” amount of subgingival excess cement was removed. When the patient returned again for follow-up at the 2-month mark, he reported tenderness and pointed directly at the apex of No. 11. The tooth was found to be non-vital and endodontic treatment ensued. Finally, at the 4-month follow-up, a radiograph was taken and the patient was referred back to the general dentist for final restoration (Figure 6).

The periodontist in this case routinely sees all implant patients shortly after final restorations are seated. In spite of this protocol and numerous attempts to schedule the patient, he never returned for evaluation. It was not until early 2012 (approximately 1 year after the restorations were seated) that the patient was referred back to the periodontist. The general dentist was concerned about what he saw in his office clinically and radiographically, along with the patient still complaining of generalized tenderness around the No. 9 implant (Figure 7 and Figure 8). Upon returning to the periodontist’s office, 6-mm to 9-mm pockets were measured around the implant with profuse bleeding on probing. The patient also described pronounced discomfort during probing and stated, “The gums around the implant have never felt right.”

Open-flap debridement was performed on the No. 9 implant. Reflecting a full-thickness flap revealed a ring of excess cement encircling the neck of the abutment and extending onto the implant fixture (Figure 9). All excess cement and granulomatous tissue was thoroughly debrided (Figure 10 and Figure 11) before suturing closed (Figure 12); no grafting of any type was added.

The periodontist contacted the general dentist to inquire as to the cement used. According to the chart notes at the dentist’s office, a resin-modified glass ionomer was used to lute the No. 11 retainer/No. 10 cantilever pontic, and a zinc oxide eugenol (ZOE) provisional cement was used to lute the No. 9 implant crown. All restorations were luted at the same appointment. Contrary to what was written in the chart notes, the cement around the neck of the No. 9 implant was much more consistent with a resin-containing cement than with a ZOE cement.

The patient did not return to the periodontist’s office for 6 weeks after the open debridement procedure. At that appointment, the soft tissues were firm, inflammation-free, and tight around the abutment, albeit with anticipated recession (Figure 13). The patient stated it was the first time he was comfortable and had no tenderness since the final crown had been seated. The patient has not returned to the periodontist for further follow-up since this visit.

Multiple case reports have described the negative effects caused by excess cement.9-11 Wilson found that 81% of patients exhibiting signs or symptoms of peri-implant disease had excess cement around their implants.12 The American Academy of Periodontology lists residual cement as one of the risk factors for peri-implant mucositis and peri-implantitis.13 This case report highlights a potential complication that may occur with the delivery of an immediate cement-retained restoration. Remodeling of hard and soft tissue after immediate implant placement is unpredictable.14 When the definitive abutment is delivered at the time of surgery, a more apically positioned restorative margin may be selected to compensate for this unpredictability. This complicates detection and access for removal of excess cement. Deeper margins have been associated with larger amounts of residual excess cement on implant surfaces and in peri-implant tissues.15

Detection may be further complicated because of the poor radiopacity features of luting cements commonly used for implant restorations.16,17 Radiographs, however, may only be useful for detection if cement is located mesially or distally. The detection of buccally and lingually distributed cement is obstructed due to the radiopacity characteristics of titanium and other restorative components.

Implants are more susceptible to cement complications when compared with natural teeth, mainly due to the differences in the connective tissue biology. Connective tissue fibers run parallel to the artificial abutment surface. This is unlike the fibers in natural teeth, which are perpendicular and oblique. There is a direct insertion of these fibers to the cementum layer of the tooth and the alveolar bone. With implants, no direct insertion exists. Even though a mechanical resistance is present, it is much weaker when compared with natural teeth.18

In the present case, no mechanical resistance existed to hinder the flow of cement onto the implant fixture. When implants are placed and provisionalized immediately, the healing process has not been finalized. Therefore, there is no presence of connective tissue attachment that could act as a barrier against the flow of cement. When this is paired with deeper margins that compensate for unpredictable tissue remodeling, it results in the most susceptible condition for residual excess cement.

The patient complained of a slight discomfort after the provisional restoration was cemented. This discomfort continued until flap surgery made the excess cement removal possible. Unfortunately, due to the tissue destruction and subsequent surgical procedures, the tissue healing exposed the zirconia abutment, and this resulted in an unesthetic final outcome.

When only one dis/reconnection occurs, such as in the change of a healing abutment to a permanent abutment, the reestablishment of a transmucosal attachment with a dimension and quality similar to those characterizing the mucosal barrier at an abutment placed during the second-stage surgery has been demonstrated.19

Two randomized clinical trials have measured the bone remodeling when the one abutment–one time concept was used.8,20 A difference of 0.2 mm and 0.3 mm was reported, respectively, when compared with a more traditional approach of multiple dis/reconnections. Both studies reported a statistically significant reduction of the crestal bone resorption around the immediately restored implants. Both studies reported a statistically significant difference in the amount of bone remodeling. However, both authors agreed that this might not have any clinical benefit or significance in the final esthetic outcome.

The concept of one abutment–one time may reduce the amount of bone remodeling around dental implants during the healing phase. This case demonstrates the possible risks involved when excess cement is not completely removed. The use of a definitive abutment placed at the time of surgery has not been associated with an improved clinical esthetic outcome. Therefore, the risks and benefits of this treatment should be evaluated and reviewed.

This article is based on a presentation by Dr. Piñeyro at the American Academy of Periodontology (AAP) 2013 Spring Meeting.

7. Degidi M, Nardi D, Piattelli A. One abutment at one time: non-removal of an immediate abutment and its effect on bone healing around subcrestal tapered implants. Clin Oral Implants Res. 2011;22(11):1303-1307.