Thorough knowledge of the root canal system and its variations is a key to successful endodontic treatment. To obtain a better visualization of the morphology present, magnification, illumination, several angulated radiographs, and careful methodical exploration are imperative.

Mandibular first molars present with complex anatomic variations.1,2 Normally, they have one mesial and distal root with two canals in the mesial root and one or two in the distal root.1-3 Middle mesial canals, which sometimes present in the developmental groove between the mesiobuccal and mesiolingual canals, have an incidence ranging from 1% to 15%.1,3 The development of middle mesial canals occurs by secondary dentin apposition during tooth maturation, when a vertical dentinal partition forms inside the root canal cavity, the diameter of which is age-related.4 According to Ingle, one of the most important causes of endodontic treatment failure is the incomplete obturation of the root canal system.5 Similarly, it was reported that a considerable number of failures could be attributed to anatomical variations.3,6

This clinical case describes nonsurgical retreatment of a mandibular first molar with three mesial and two distal canals; it was followed-up for 12 months.

A healthy 28-year-old male patient was referred to the Department of Conservative Dentistry and Endodontics, Bapuji Dental College and Hospital, Davangere, India, with spontaneous pain in the mandibular left first molar. Endodontic treatment had been completed 2 years previously. Radiographic evidence of periapical and furcation pathosis was present, and a radiopaque material seen in parts of the pulp canal system confirmed chronic apical periodontitis (Figure 1). Nonsurgical endodontic retreatment was planned. During access preparation, the coronal pulp chamber was found to contain amalgam and an unknown base.

Four independent canals were located, each leading to its own apical foramen. Gutta-percha was retrieved from the canals with the help of an H-file. During treatment, a depression was felt in the pulp chamber floor toward the center of the mesial root canal entrance. The lip of dentin covering this area was removed with a long shank round bur. The middle mesial canal was close to the mesiobuccal canal. The distal root showed two canals with two independent foramina, which were connected at the cervical third and had a common orifice in the pulp chamber floor. The working length was determined radiographically and corroborated with an apex locator. In the distoangular radiograph, the presence of a wide mesiobuccal canal with a rather pronounced curvature was seen (Figure 2). There was a middle mesial (intermediate) canal that converged with the mesiobuccal canal at the apex. The canal was shaped until it reached size 30 apically. A copious amount of 2.5% sodium hypochlorite was used as an irrigant. Two-visit root canal therapy was planned due to the complexity of the canal system. The canals were dried with paper points and dressed with freshly mixed calcium hydroxide with glycerin. The access was then temporarily sealed with non-eugenol cement.

Two weeks later, the patient returned for obturation of the canal. The tooth was asymptomatic, and following final irrigation with saline the canals were dried with paper points and deemed ready for obturation. A radiograph was taken to confirm the extension of the master cone to the estimated working length (Figure 3). The tooth was then obturated with a cold lateral condensation technique using gutta-percha and an epoxy-based sealer. The obturation radiograph showed radiopacity between the middle mesial and mesiolingual canal, suggesting an isthmus (Figure 4). A coronal seal of composite was placed, followed by a porcelain-fused-to-metal (PFM) full-coverage crown. One-year recall showed a decrease in radiolucency in the furcation and periapical region, with no clinical signs of infection (Figure 5).

Incomplete instrumentation, inadequate cleaning and shaping, and the subsequent defective obturation of root canals are the main causes of endodontic treatment failure.7 Anatomical variations are challenges routinely faced by practitioners performing endodontic treatment. The middle mesial canal, if present in a mandibular first molar, may have an independent foramen or may join the mesiobuccal (more frequently) or mesiolingual canal at the apical or middle third.8 In the literature, retreatment of a mandibular first molar with three canals in the mesial has been reported without any follow-up.9

The middle mesial canal can be classified as "fin" when the instrument can pass freely between the mesiobuccal and mesiolingual canals and the middle mesial canal, "confluent" when the prepared canal originates as a separate orifice but apically joins the mesiobuccal or mesiolingual canal, or "independent" when the prepared canal originates as a separate orifice and terminates as a separate foramen.10 Fabra-Campos8 suggested the following steps to locate the middle mesial canal: Once the access cavity is made, a round bur can be used to eliminate the dentin from the mesial wall, or a thin explorer can be utilized from the orifice of the mesiobuccal canal toward the mesiolingual canal to search for any possible depression. Next, a file is used in an alternating 45-degree rotating motion to negotiate the canal; if the canal contains blood vessels, a spot of blood can be seen. After locating the canal, a small round bur or an ultrasonic tip can be used to widen the orifice.

Different studies1,8,10-12 of the morphologic structure of root canal systems have demonstrated a great disparity in number of canals, orifices, and anatomy (Table 1). Single-visit root canal therapy is not contradicted in such cases, but multiple-visit root canal therapy was planned due to the complexity of the canal system.13 In such cases, calcium hydroxide is used as a barrier against coronal leakage from temporary filling materials.14 There is no specific protocol for retreatment cases, but studies have shown that irrigation with sodium hypochlorite helps in eradication of infection in retreatment cases.15 Epoxy-based sealer was used, which has the advantage of AH-26 sealer but is less toxic.16

The surgical implication of such a clinical case is also important if nonsurgical retreatment fails. When apical surgery is performed on the mesial root, the apex should be resected at a 45-degree angle to enable the operator to prepare and obturate the canals. A small preparation of adequate depth and circumference should be made in each mesial canal and then connected. The connecting preparation should be made with satisfactory depth to allow for retention of the filling and should be widened adequately to accommodate the condensing instrument.10

Knowledge of dental anatomy is fundamental for good endodontic practice. Access of cavity refinements may be required for stress-free entry into complex anatomy. Intricate mandibular molar anatomy may be predictably managed following its proper identification and exploration. 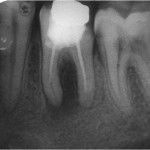 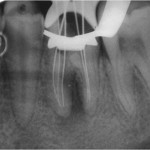 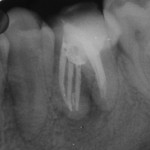 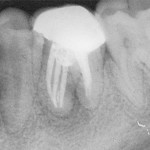