Kuraray America has always had a special passion for adhesive dentistry, explains Keiko Shoji, marketing manager. "That’s what we’re known for. We’ve never lost sight of our core philosophy of dental health—the longevity of the restoration and the concept of minimal intervention. Adhesive dentistry is key to both those aspects." 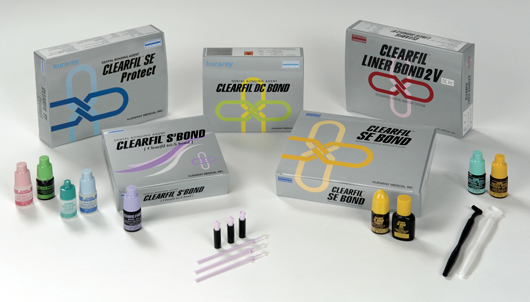 According to Shoji, from the beginning, legendary scientists Dr. T. Fusayama and Dr. E. Masuhara at Tokyo Medical and Dental University, who collaborated in the development of Kuraray’s first total-etch adhesive restoration system, wanted to keep as much of the tooth structure as possible to retain the overall dental health of patients while providing long-lasting restorations. "That was their belief, and it continues today at the company," she says. "In order to achieve minimal intervention, adhesive dentistry is crucial. With the scientists’ help, Kuraray developed the first total-etch bond system in the 1970s. Initially, the concept of total-etch was met with resistance in the United States and elsewhere. A few years later, however, the total-etch technique was widely accepted and has changed dentistry forever. Chemical bond strength alone will hold the restoration in place, meaning that you do not have to remove as much tooth structure."

The company’s highly regarded, innovative adhesive products fit closely with its fundamental goals. "For example, some people believe self-etch, which was also developed by Kuraray in the 1990s, is just a shortcut of total-etch, but that’s not the case," Shoji says. "We’re trying to improve adhesion, and thus the dental health of patients." A recent study by Dr. B. Van Meerbeek at the Catholic University of Leuven in Belgium revealed that 8-year clinical success of Class V restorations with CLEARFIL™ SE BOND was 97%. (See graph.) "It is significantly better than what we have seen in the past with various total-etch adhesives," Shoji adds. "The long-term success rate of composite restorations was often believed to be 50% to 70%."

"Today, a lot of self-etch products are focusing on one step—focusing on the process more than the result. We like to concentrate on the result first," she says.

In the section below, Shoji responds to questions about adhesion in general and the company’s product offerings.

What was the driving force behind the development of self-etch adhesives?

Kuraray offered the first total-etch product in 1978. Over the years, we continued research and development on total-etch bonding, and by the mid-1980s, it was clear that two issues—postoperative sensitivity and technical sensitivity—were something that we needed to work on. As a result, the self-etch system was invented in the 1990s, which I believe has significantly impacted dentistry. Self-etch reduces postoperative sensitivity and eliminates total-etch’s technical sensitivity. Of course, the other result of self-etch is that the process has become easier. In 1999, we introduced our CLEARFIL SE BOND, which quickly became very popular and is probably the most famous self-etch bonding agent today.

In our opinion, if you look at the current US market, it’s about 50/50 in users between total-etch and self-etch. Though we believe self-etch is the most advanced technology in adhesive dentistry, no one can really say what the overall "standard" is in dental practices today. Both products have their appropriate uses and their strengths.

What are some of the more important features of Kuraray’s adhesive offerings?

Technology-wise, we invented MDP, an adhesive monomer, which is possibly the most reliable, stable adhesive monomer available today. In addition, we developed innovative technology to incorporate the MDP into various dental adhesives. As a result, all the adhesives we make, including adhesive cement, contain MDP.

What about your latest offering, CLEAR FIL™ SE Protect?

Last year, we presented our new CLEARFIL™ SE Protect, through which we introduced an antibacterial monomer and fluoride that’s added into the adhesive. It works the same way as CLEARFIL SE BOND does, and I believe a lot of customers have responded favorably to its features—not only the superior long-term bond strength, but also the combination of antibacterial and fluoride-releasing features that other companies don’t offer. This newest addition also supports Dr. Fusayama and Kuraray’s fundamental philosophy, "maximizing the longevity of the restored tooth with minimal-invasive procedure."

What new educational initiatives in adhesion technology are you offering?

In addition to local study clubs, CE courses, and hands-on seminars throughout the US and Canada, we recently started something we call the Adhesive Symposium. Kuraray recognized that there’s a gap between dental researchers and clinicians—a gap in understanding materials. These Adhesive Symposiums are our commitment to help close the gap. At these events, global-level dental researchers communicate with key opinion leaders who are responsible for educating general dentists on what’s the most current adhesive technology. We are currently holding these symposiums about three times a year, and attendance is increasing considerably.

What do you see in terms of a curve for the clinical application of advances in adhesion technology?

Disseminating the latest information can be a slow process. Researchers are focused on their studies, and clinicians also have to consider the patients and their finances. However, we see that gap gradually getting smaller.