Oral Factitious Injury in a Child Diagnosed with Kabuki Syndrome

Factitious injury or self-injurious behavior is a common manifestation in children affected by neurologic, developmental, or psychiatric disease. The nature and presentation of this behavior in the oral cavity varies among diagnoses, and such behavior can be easily missed. This report describes the presence of self-injurious behavior in a child diagnosed with Kabuki syndrome who presented to a pediatric dentistry referral practice for evaluation of gingival bleeding, and provides a brief overview of the known etiology and management of this challenging condition. Clinicians should be aware of the possibility of self-injurious behavior when treating children diagnosed with Kabuki syndrome.

Kabuki syndrome is a rare, multiple congenital anomaly/mental retardation syndrome first described in 1981.1 Initially reported in Japanese children, this syndrome may occur in many ethnic groups. The most striking aspects of the disorder are the unique facial features, including long palpebral fissures, arched eyebrows, short columnella, and prominent ears (Figure 1). Other findings include microcephaly, hypotonia, seizures, hearing loss, ptosis, strabismus, congenital heart defects, renal anomalies, growth-hormone deficiency, skeletal abnormalities, and immune deficiencies. Dental and craniofacial findings include a trapezoidally shaped philtrum, cleft palate or cleft lip/palate, lip pits, hypodontia, microdontia, a small dental arch, maxillary recession, and midfacial hypoplasia (Figure 2 and Figure 3). Mental retardation is considered a cardinal manifestation of the disorder. Approximately 300 cases have been reported in the literature. There is no standard testing for this syndrome, and the diagnosis is made from phenotypic characteristics.2 This article, to the authors’ knowledge, is the first report of oral self-injurious behavior in a child with Kabuki syndrome.

An 11-year-old Middle-Eastern boy presented to The Children’s Hospital of Philadelphia (CHOP) complaining of gingival bleeding from the left side of his mouth. A detailed review of his medical history revealed that he was diagnosed with Kabuki syndrome at 1 year of age. Chromosomal analysis showed the normal male karyotype 46, XY. Other findings at that time included bilateral kidney hypoplasia, beta thalassemia trait, retinal colobomas, ventricular septal defect, which closed on its own at 2 years of age, mild scoliosis, and submucous cleft palate. At 3 years of age, the patient was also diagnosed with autism and developmental delay. At the time of presentation, he exhibited characteristic facial features of the syndrome: arched eyebrows that were sparse on the lateral third, long palpebral fissures, eversion of lateral third of the lower eyelids, large prominent ears, broad nose with a depressed nasal tip, and scoliosis. He also had a low-tone subluxed left hip and was under the care of specialists at CHOP.

Intraoral examination revealed moderate bleeding of the maxillary left gingiva surrounding a primary second molar (Figure 4, Figure 5 and Figure 6). Periodontal examination revealed normal osseous and gingival anatomy with minimal recession in the distal of the tooth. After careful observation and additional parent questioning, it was apparent that the child favored the left maxillary area when introducing his fingers into the mouth, and that the gingival bleeding was aggravated by the finger habit. The remaining mixed dentition was normal.

The parents were encouraged to monitor the patient closely and dissuade him from putting his fingers in his mouth. Meticulous oral hygiene with a soft toothbrush (three times per day) was reinforced. A 2-week follow-up visit revealed healthy soft tissue around the affected tooth, which exfoliated approximately 4 weeks later.

The presence of self-injurious behavior involving the oral soft or hard tissues is documented in the dental literature involving both children and adults.3-7 A plethora of diseases are linked to this behavior, and psychiatric abnormalities such as depression, social stress, and low esteem are often present.8 In addition, eating disorders and suicidal behavior are common in adolescents who are subject to intense peer pressure.9

One form of self-injurious behavior that reflects destruction of one’s body without suicidal intent is termed nonsuicidal self-injury (NSSI).10 NSSI may produce factitial sequelae, affecting the hands, head, and neck. This type of self-injurious behavior can be attributed to functional and biologic causes. A recent study in preadolescent girls reported a close association between internal distress (peer victimization) and the onset of self-injury for social reinforcement. Worth noting is that half of the girls interviewed in this small study admitted to recent NSSI.11 Another population-based Canadian survey reported that 20% of 568 youngsters interviewed admitted to some form of self-injurious behavior, with 56% not receiving professional help for this behavior.12 NSSI often occurs in the oral cavity as repetitive movements that cause tissue damage and is seen in normal or mentally impaired individuals. Syndromes and psychiatric disorders where these behaviors are reported include mental retardation, autism, cerebral palsy, Lesch-Nyhan syndrome, Cornelia de Lange syndrome, Tourette and Rett syndromes, hereditary sensory and autonomic neuropathy, familial dysautonomia, and Chiari type II malformations.4-7 Similarly, patients who have sustained severe traumatic brain injury or are comatose may develop neuropathologic chewing that can result in self-inflicted injury.3 An altered sensitivity to pain predisposes these patients to extensive oral self-inflicted ulcerations, leading to loss of permanent dentition and mucosal scarring that affects masticatory function.

The etiology of self-injurious behavior is linked to an abnormal balance of neurotransmitters.13 Abnormal levels of endorphins and enkephalins, endogenous opiates linked to self-satisfaction and well-being, are found in the cerebrospinal fluid of some patients. These individuals engage in repetitive behavior to fulfill the need for production of these molecules. Dopaminergic dysfunction is described in some subgroups, and similar behaviors have been induced experimentally by dopamine agonistic drugs. Serotonin dysfunction is documented in children exhibiting self-injurious behavior with agitation. Often, these children are affected by increased stress and compulsive-obsessive disorders that set forth the injurious behavior.

Biologic and environmental determinants play an important role in the development of self-injury in genetically and psychologically susceptible children. Common triggers in this category include allergic reactions, constipation, otitis media, and other painful conditions that present the child with an unfamiliar pattern of events, leading to the behavior.14,15 The nonverbal child in the presence of frustration, stress, or attention-seeking may become involved in self-injurious behavior.

From an oral perspective, the severity of self-injurious behavior is divided among neurologic trauma, developmental delay or syndromic diagnosis, and psychiatric conditions that may have this type of behavior as an outcome.

The management of oral self-injury has been limited to nonpharmacologic interventions, ranging from behavior modification to placement of intraoral appliances intended to protect and isolate the soft tissues. These appliances can be hard, made from acrylic, or may be made of soft material, depending on the nature of the injury. Other interventions include occlusal adjustment of protruding or sharp dental anatomy to limit the amount of damage and pharmacotherapy, which is used in patients with autism, mental retardation, and syndromic disease.15 In most instances, a combination of psychosocial, cognitive, and pharmacologic interventions is necessary to control the behavior successfully.15,16

Based on their search of the literature, the authors believe that this article may be the first report of oral self-injury in a child with Kabuki syndrome. Dentists must be able to recognize behavior patterns of oral self-injury in this population as well as the triggering events that may lead to a new onset or change in behavior pattern. Many of these children may have intraoral sources of discomfort or pain unrelated to neurologic or biochemical central nervous system abnormalities that precipitate the aberrant behavior. A team approach with close collaboration with the child’s physicians enhances the efficacy of dental, behavioral, and pharmacologic therapy in circumstances where the self-injurious behavior requires more than physical interventions to manage. The case described in this report is mild in severity and presumably linked to the discomfort associated with the mixed dentition, as the self-injury resolved solely with simple behavioral intervention. 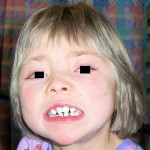